Posted on Wednesday, 4 November, 2009 by phillbarron

Selling a script is a lot like selling a car – you just want to get the damn thing off the drive because it’s annoying your wife.

Okay, selling a script is nothing like selling a car unless you count ‘having the same word in the sentence’ or ‘a financial transaction involving the exchange of goods’ as similarities.

Oh, which I guess they are.

Although, by an amazing coincidence, I am trying to sell this car: 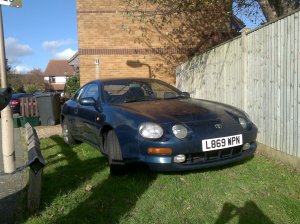 … and can’t really figure a way to mention it on a scriptwriting blog.

Once owned by a completely un-famous (but vaguely infamous) scriptwriter – does that stir you in any way? I think the car’s immortal, I’ve certainly never been able to kill it despite a homicidal approach to roundabouts and a complete lack of interest in maintenance.

I once drove it through a puddle so deep the water was lapping at the windows. Well, I say puddle, pond is more like it. Lake maybe? No, pond – let’s not exaggerate.

Ooh! The interior is exactly 26 seconds into the past. That’s right, the interior is in a different time zone – a weird and fabulous land where the radio still plays the intro of the song while the rest of the world is on the first verse. Seriously, if you approach the car with a portable radio you can hear the time shift. If you shine a light into the windscreen, you can get into the car before the light hits the interior!

Granted, that does make reading road signs rather difficult; but what’s life without danger?

Longer. That’s the answer. In case you were wondering.

Come on, what do you say? It looks a bit like K.I.T.T. – assuming K.I.T.T. was Japanese and a bit shit. Volunteer a reasonable price and it’s yours! I’ll even throw in a personal visit from me as I drive it to anywhere in the world of your choosing!

Subject, of course, to you paying the petrol and my return train ticket/flight/submarine fare.

Come on people, how can you afford to pass up this, the bargain of a lifetime?

It really is for sale, honest.

3 thoughts on “For sale”