Whilst desperately trying to avoid doing any real work, I’ve been browsing through a few scriptwriting, comedy and general TV forums and looking at some of the complaints voiced by aspiring writers … I thought I’d address a few of them here:

1. Film/TV in the UK is too London centric

Yes. And no. Films are made everywhere, bits of TV are made in most big cities; but yes, a large proportion of film and TV is made in London and those producers tend to want to work with someone they can actually talk to face to face. If you live in Tinycock, Cumbria then you are at a slight disadvantage. If you write something so ball-smackingly amazing it just has to get produced – no one will care where you live. If, like most of us, you’re distinctly average then geographical location can be a problem.

This may be a hard pill to swallow, but people like to work with people they like.

Really, it’s not that difficult. Sell your house/flat/bedsit, or give notice on your contract, chuck your stuff in a van and drive to a new house/flat/bedsit in (or preferably near) London. If your lifelong ambition is to be a lighthouse keeper and you happen to live in Birmingham then it’s just tough shit – you have to move for the job. Many, many jobs involve moving to a new location, if you want to do it badly enough then just suck it up and move.

Of course, some people can’t just move for personal, familial, health or other reasons – in that case, sorry, but you’re just going to have to be better than everyone else. You’re actually going to have to learn how to be a good writer.

Fuck the Writersroom. Seriously, fuck them.

The Writersroom do a good job, they have a specific remit to fulfill and they do it well. They are an invaluable route into the industry and everyone should make use of them, but … THEY ARE NOT THE ONLY ROUTE TO SUCCESS.

Phew! Underlined and in bold. Maybe I should use italics too? No, that’s overkill.

If the Writersroom is your only strategy then you’re a fucking idiot. The competition is immense and the odds are you won’t get anywhere with them. You might and you should try, but for fuck’s sake don’t pin all your hopes on them. If they don’t read your script past ten pages it might be because you got a reader who doesn’t like/get your particular style of writing, but it’s far more likely you’re just not very good.

No, let’s qualify that – it’s far more likely that particular script isn’t very good. It isn’t necessarily a reflection on you as a writer.

But it probably is.

“Ah! But I know someone who got rejected by the Writersroom but then got optioned by– ”

So what? I mean, really, so fucking what? Good for them, that doesn’t make the Writersroom wrong or ill-conceived or evil or a conspiracy or anything. It just means one person didn’t like your script and someone else does. People like different things, grow up and get on with it.

Try the Writersroom, try something else. Try everything else. Just stop fucking whining about it.

No,wait … let’s look at this again. Why do a lot of people SAY they won’t read unsolicited scripts?

Because most scripts are utter shit … and there are a lot of them out there. A whole mountain of shit, oceans of shit … offering to read unsolicited scripts is basically asking people to shit through your letterbox.

But they will do it. Read unsolicited material, not shit through your letterbox. I don’t think anyone offers that service – although, there is a gap in the market …

Write to them, be polite and ask them. They might say yes. You’d be surprised how many people will give you a go. One go. Don’t fuck it up.

4. I can come up with the ideas, I just need someone else to write them

Then you’re not a writer, you’re a producer. Or more likely, a fucking no hoper/dreamer.

This is exactly right … and mostly wrong. Learn the what, then go out and meet the who. Most writers start without knowing either. Most successful writers learn how to know both. Most failed writers forget to learn one or the other. It’s a fairly simple fucking equation:

Stop being a whiny bitch.

6. Nobody will give me a break

Fuck you, why should they? Make your own breaks. You may well be a competent, engaging writer with an interesting voice and something to say. Chances are you fall short on one or more of these things; but I can guarantee, with mathematical certainty, YOU ARE NOT AN UNDISCOVERED GENIUS WHOSE WORK IS BEING IGNORED.

Most likely you’re mediocre, maybe you’re even competent, possibly one of you reading this blog is actually edging towards good – but it doesn’t fucking matter. You can make a career for yourself if you try and keep trying. Nobody will hand you a career and all those examples you can quote about so and so getting discovered by random chance are either bullshit or so fucking unlikely it’s not worth thinking about. Someone, somewhere got a truly lucky break – good for them. Someone somewhere won the lottery – chances are it’s not going to happen to you, so make your own fucking luck.

No they didn’t. Your idea was shit, they just had the same shitty idea. You remember that newspaper article which set you off? Guess fucking what? You weren’t the only person in the world to read it. They just got there first. Tough shit, move on.

8. Producers are biased against older people

How the fuck do you know how old someone is from a script?

9. Producers are biased against race

How the fuck do you know someone’s race from a script? If you’re that worried, change your name to John Smith – that’ll fox ’em.

Actually, this one is vaguely true – some producers are incredibly racist … but guess what? You wouldn’t want to work with them anyway.

No it’s fucking not, the BBC bends over backwards to be all encompassing. It’s probably not your race/age/sex/disability which stands against you, it’s probably your complete lack of ability and the fact your head is shoved right up your arse.

11. The BBC is biased against white, middle class men because it has a PC agenda

Fuck you, you whining little prick. “Oh, help me, I’m part of the only demographic in the country who doesn’t get discriminated against and some people who don’t owe me a living, despite my personal beliefs, are trying to encourage someone who isn’t me to take part.”

Anyway, why the fuck do you want an agent? You haven’t got any work. You have no contracts to negotiate, no ten percent to pay them and have made no effort to advance your own career – why should they do what you can’t be arsed to do?

13. I’m too tired after my job to do any writing

Get a different job.

14. I can’t find time to write because of my children/family/pets

Kill them. Kill them all now. You’ll obviously be much happier without them … although you will then have to find someone else to blame.

This is just the way the world works – people who have time to do something are more likely to succeed than people who haven’t. If you can change your situation (without killing anyone, please) and scrape half an hour a day – then do it. If writing means that much to you. Although, really, it’s just a whole ball of frustration and headaches. If you can’t, if you really, really can’t (not even 29 minutes?) then it’s just tough.

15. All the other complaints I’m fucking sick of reading when I really should be doing something useful

You’re wrong. All of you. Or maybe you’re not, either way – shut the fuck up and get on with some writing.

And here they are:

No doubt you’ve heard that getting work in the film and TV industry is a case of, “Not what you know, but who you know.”

It’s true. Talent will get you so far but relationships are where the business gets done.

Getting someone interested in your work is only the start of the process. This information packed one day course is your chance to learn from successful Writers, Script Editors and Producers about what happens next.

The course is hosted by Adrian Mead and Clare Kerr of Mead Kerr and we are very pleased to welcome Philip Shelley as the lead speaker and tutor.

Philip Shelley is one of the UK’s most experienced Script Consultants and Editors and has worked as a Script Editor and Producer in TV drama and film for 15 years. He has script edited numerous projects including A Good Murder, Waking The Dead, Inspector Morse, Kavanagh QC and many more.

During this info-packed day Philip, Adrian Mead and a panel of Writers and Producers will explore

• What can Script Editors do for Writers
• Handling rewrites – fighting your corner without falling out.
• “It’s not what you know…” Relationships that get you work.

Book your place now at http://rewrite.eventbrite.com and get the insider knowledge you need to build your career.

I know I’m supposed to be working on your script, but … 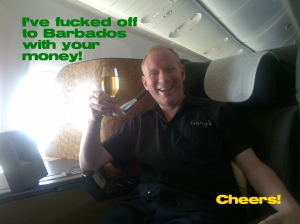 … to everyone who’s emailed with polite, supportive comments about ‘Just for the Record‘. That’s jolly nice of you and I’m glad you enjoyed it.

Obviously, I can’t take any credit for anything you liked in the film – that privilege is reserved for either director, Steve Lawson, or the specific performers; but on the off-chance the bit you liked was in some way connected to the script I wrote – I’ll bask in that little glow.

That’s not to say the happenings on screen bear little or no resemblance to the script – far from it. In fact, I’d say 90 odd percent of what’s there comes from my script – but obviously anything you write is made or killed by the performances, the editing, the direction … a whole myriad of stuff.

The bottom line, at the end of the day, when all’s said and done is I’m touched by how supportive you lot have been. It’s great you’ve gone out of your way to buy/rent the film and that alone is heartwarming and deserves a thank you.

Whether you enjoyed it or not is a secondary issue, but if you did (assuming you’re not lying in an unsolicited email for no personal gain) then all the better.

Buy yourself a drink, on me*.

* Reimbursement for any drinks bought as a result of this statement will only be honoured if the receipt is submitted in person, at my home address, in fancy dress and signed by Jesus.