Posted on Monday, 17 September, 2012 by phillbarron

Hello, how are you? Did the rash clear up? What about that whole mess with the rugby team, the tree frogs and the Angel Delight? All sorted?

I’m still here on my secret writing island and I’m wallowing in luxury. 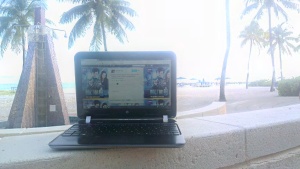 Not luxury in the fluffy towel, heated face mask, “you-there, rub my feet and wash my genitals in champagne” kind of way.

Although, if I’m honest, that’s a fairly standard Wednesday around here.

But no, the luxury I’m wallowing in, is time.

I have it now.

It’s here and I’m wallowing in it, like a hippo in the throes of sexual ecstasy.

In other words, the new regime is progressing marvellously.

True, all five of the five projects I have in development are threatening to need re-writes any day now, with various producers and directors sudden;y insisting it’s vitally important we speak really, really soon … but that’s the storm raging on the horizon. Here in the eye, it’s all calm and I have time to pause, down tools … and think.

Thinking has been a surprising luxury in my career to date. At one point I was failing to write twelve feature films at the same time. Failing both in terms of quality and quantity, three of them I just never quite got round to and the projects evaporated as these things are wont to do.

This is kind of an interesting aspect of the industry: feature film projects are like headaches – if you ignore them for long enough, they just go away.

The last feature I had produced, I was brought on a month or so before filming and given a week to fix it. For subsequent drafts, of which there were far too many (most of which during what some people would term ‘the shoot’ but is more correctly known as ‘the fucking disaster’) I was sometimes allowed up to 24 whole hours. One memorable batch, or the final nail as I like to think of them, needed to be done in 3 hours.

By the way, as a general rule of thumb, the more rewrites you have to do during production because of actors being sacked, an overly optimistic schedule or to accommodate pointless celebrity cameos – the bigger the pile of shit the film will turn out to be.

Not always, but usually.

So now I have time. I am my own boss. I can do whatever I like and what I like is to take a step back, stop writing and think.

Just pause for a while.

What have I done so far? Is it any good? Is it still what it was meant to be? Am I heading in the right direction? If not, is the new direction better or worse? Am I happy with the idea/treatment/script as a whole? Do I need to redo anything before continuing?

All good questions. Questions I not only have time to ask, but time to answer.

Which is a polite way of saying STOP WANKING AND DO SOME FUCKING WORK.

But actually, a more accurate saying would be: A writer thinks.

Thinking time is massively important. To me, anyway. You may disagree, which is fine and is your prerogative … even though you’re completely wrong.

To me, thinking is a luxury I’ve not really had before.

I’ve got a pause button now, and I’m not afraid to use it.

Now, if you’ll excuse me, Gunter is here with the champagne and these genitals won’t wash themselves.

4 thoughts on “The pause”