Posted on Wednesday, 15 April, 2015 by phillbarron 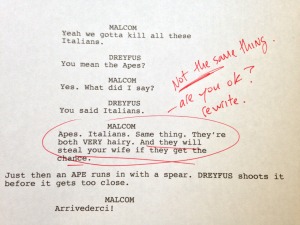 I’m always acutely aware that as we progress towards and even through production any rewrites are effectively first drafts. Anything which hangs over from the first full draft of the script will be rewritten, tweaked and massaged 50 times. Anything which is inserted on the set, minutes before being filmed will be a first draft.

The first thing I thought of. 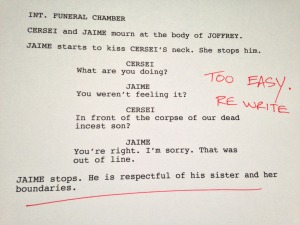 Sometimes not. Sometimes those things turn out to be the best bits of the entire film. Hopefully the script is robust enough to cope with having the odd scene yanked out and replaced at a moment’s notice.

But still I worry.

Not about being shit. Or writing shit. But about letting people down.

Actually, no. That’s not true. I don’t feel like I’m letting someone down if the first draft of a new scene isn’t perfect because that’s a silly expectation. The first draft isn’t going to be perfect and I know that. The thing I worry about is does the client know that?

Or do they just look at the current draft, the one which seems perfect and flawless and beautiful and wonder why anything new added to it can’t immediately achieve the same standard?

I hope they understand the first draft of anything new is just a thumbnail sketch, a rough edit to act as a starting point. It’s a talking point, a jumping off point for a discussion.

Basically, I don’t want them to think that that’s the best I can do.

Which sounds odd. As if I’m not really trying on the first draft of any new line or scene … but I am. I try really hard and the results will always be fair to middling. Even though I’m trying my hardest, that isn’t the best I can do because it isn’t the end of the process, it’s the beginning. 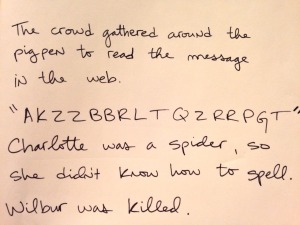 Or at the very least a temporary midpoint. A way of saying “I’ve penciled stuff in, speak now before I ink the bastard”.

I really don’t mind being told something I’ve written is terrible. I do mind a client thinking it can’t be improved upon. Or more specifically, I can’t improve on it.

Why yes, I am currently waiting for notes on a couple of projects. How did you know?

One thought on “Necessary shitness”