Posted on Monday, 7 December, 2015 by phillbarron

It’s snowing on my blog, which can only mean one thing – it’s Christmas (or thereabouts).

Or I’ve fiddled with the settings, turned something on by accident and it’s actually July.

Or your screen is broken.

Doesn’t look like July out there and I’m sure you’re far too tech-savvy to have a knackered screen, so let’s go with it’s (nearly) Christmas.

And since it’s probably very nearly Christmas I can forego thinking about things to blog about and, as is traditional (if you count once as traditional) instead just promote people and stuff I kind of like a bit maybe.

Watch the video, it’s funny. If you agree, maybe you’d like to slip over to Arnopp’s Patreon Page and give him some money. Alternatively, maybe you think the video is incredibly well directed and feel like popping over to James Moran’s blog and offering him some work. He’s won awards, you know?

Fuck it, it’s Christmas – why not do both?

Patreon is interesting. If you’re not aware of it, it’s a kind of like Kickstarter only you’re paying (mostly) creative people just to carry on being themselves as opposed to promising to maybe fund something in the future if it happens perhaps. It’s kind of like a financial pet on the head, patronising in the older, lesser used sense of the word …

Just without forcing them to sleep with you in gratitude.

At least I think so. Maybe if you want Arnopp to sleep with you you should try giving him lots of money and see what happens?

Actually, don’t do that.* It now sounds like I’m accusing him of being a prostitute. This was meant to be a nice, festive thing. 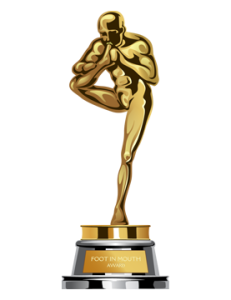 I’m just going to leave it there before I make things any worse.

* Do give him lots of money, don’t expect anything in return. It’s Christmas for fuck’s sake.