The Last Days of Jack Sparks 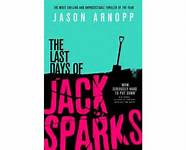 I know I’ve written about this before, but THE LAST DAYS OF JACK SPARKS has actually been properly released now.

And I’ve read it.

I mean, actually, properly, really, genuinely good and not just ‘hey, my mate wrote this thing and asked me to promote it, but I don’t really like it so I’m going to be quirky and noncommittal about the whole thing’ kind of good.

Not only do I think it’s good, but so do other people.

All these people, for example.

So hey, if I like and they all like it, maybe you will too? You can buy it here .THE LAST DAYS OF JACK SPARKS or maybe wander into town and buy it from an actual proper shop from a proper person?

You never know, you might make a new friend. Or at the very least end up with a damn fine book to read.

It’s not very often I don’t action a note, at least not without first explaining why it wouldn’t work – generally produces and directors are smart enough to accept reasoned arguments. Recently, however, I found a note I couldn’t action.

I tried, I really did. I tried four times, but every time I got to the middle it either fell apart or meant I had to keep rewriting the entire script.

The change sounded like a small and reasonable one. In essence (and without giving away the terrifically exciting plot) two teen boys do x in order to y. Where x is something monstrously stupid and y is getting laid.

The problem was neither the producer nor the director believed the teens would do x just to get laid. Which I was surprised at since we were all teenage boys once and I at least would have happily brought about the apocalypse for less.

But in retrospect, doing x to get laid is both extreme and not really an obvious decision. 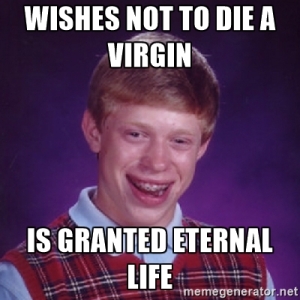 So they asked if I could change y to z – after all, it’s only a minor change.

The problem is, z is revenge on their school bullies and revenge is a fairly negative goal. It’s hard to build empathy with someone who deliberately releases x on the world in an act of revenge.

Their solution was have them quickly realise x wasn’t a nice thing to do and immediately regret it … but that led to more problems as the rest of the script didn’t make sense. Also, since the audience knows x is a bad thing to do, it seems unbelievable the teens wouldn’t. For example, detonating a nuclear weapon because you’re cold and you think it might warm you up is stupid and weird, but perhaps more understandable than detonating one in an act of revenge for someone stealing your parking space. 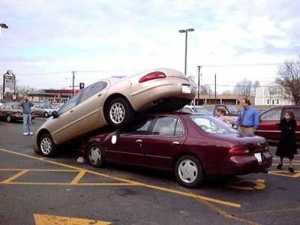 The problem is one of justification. I tried various ways of justifying both the revenge and x, constructing several completely different openings in the hope one of them would segue perfectly into the rest of the script … but none of the new openings ever went anywhere near any of the other scenes, the ones everyone was already happy with.

And then it hit me, the reason I couldn’t just change y to z was because it was a fundamental change to the logline of the script. Changing the character’s motivation changes everything they do and (in some cases) everything they are.

That equation, people doing x because of y, is the DNA of the script. It runs through everything, it dictates not just story but characters and theme and … well, everything. You can’t just alter half the equation and expect to only change half the scenes which spring from it, because every scene and every character is in someway an answer to that logline equation. The only way I found round it was to alter x and y at the same time so the answers still made sense. 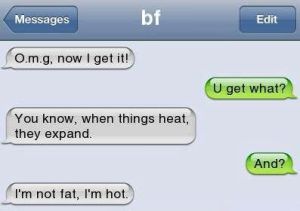 I wish I’d figured that out three weeks ago, instead of banging my head against that particular brick wall. In the end I found a y which was similar to getting laid and actually incorporated getting laid into it, but was much broader in scope. The other, more significant change was altering what they believed x was. So instead of doing something monstrous to get laid, they believed they were doing something heroic to be popular.* The fact that x was essentially the same thing approached from a different angle meant the rest of the script from x onward remained similar … and the problem was solved. 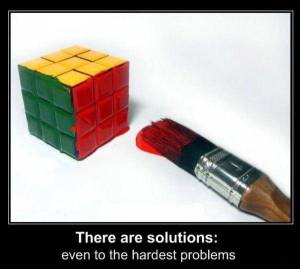 At least, I think it was. I haven’t had the feedback yet so I may well be wrong … we’ll have to wait and see.

* Imagine a world everyone made films about how nuclear weapons were just misunderstood and were actually fun and gently warming and sexy. Imagine the teens live in a town which has a nuclear weapon festival every year and all the other teens dress up as nuclear weapons and then have sex with each other because nuclear weapons are such a turn on. Then imagine a couple of desperate idiots and it seems reasonable (within the context of the story) that they might think detonating one would make them popular. Especially since we’re not actually talking about a nuclear weapon, it’s just  a terrible analogy.

This is a post for producers and directors, or any note-givers really. It’s about how writers receive notes.

Or maybe it isn’t? Maybe it’s just about how I receive notes? After all, I don’t speak for all writers everywhere.

Receiving notes is tricky because of two key factors:

1: Most writers suffer from impostor syndrome.

Most of us fear we’re terrible at this whole writing lark and no matter how many people keep paying us to write and claiming to be happy with the results, sooner or later everyone’s going to work out we can’t do it and no one will ever work with us again. Lots of people in lots of occupations suffer from this sort of thing, it’s incredibly common as well as being incredibly silly. Every time I receive notes I assume there will only be one: YOU’RE SHIT, GET OUT.

Luckily, this rarely happens to me. You’d think, looking at some of the terrible films which have been produced from my scripts that it would happen more often … but it doesn’t because either those films bear little resemblance to the scripts they were loosely based on, or they are exactly what I was asked and paid to write. In all but two occasions* I can recall, the producer or director (or both) has ended the rewrite process happy.

Every note comes with a calculation attached – how much of what I’ve done am I going to have to destroy in order to action that note? How long is this going to take me and will the end result actually make the script better? Or just different? 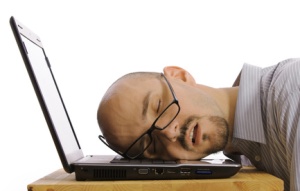 Ultimately I want the script to be better and will put in whatever work it takes to make it the best it can be … but it can be really upsetting to get one of those notes, even if it will fundamentally benefit the script in an amazing way. Some note-givers like to deliver notes via phone or face to face … which I hate. These notes are like stun-grenades which shut down my ability to do anything while I frantically try to calculate how much work it will take versus how much better the script will be afterwards.

Which is why I prefer to have notes delivered via email first – it gives me time to grieve.

After grief comes acceptance and calculation – is this better or not? Am I being resistant because it’s not my idea or because I’m lazy? What’s best for the script? That is the bottom line – will it improve the script?

If I get that idea in an email I have time to follow the proper foot-stamping, swearing, calm down and get on with it procedure.

If I get that idea face to face or  over the phone … I’m going to go quiet for a bit. That bit might be a few seconds or it might be a few hours. Depends how long it takes me to scream inside my head and then process all the ramifications for every single event in the script.

The point of this post is just to warn you, the note-giver, that it’s fine to give notes by phone or in person if that’s what you prefer. You just need to understand that when I go quiet or gibber a little, it’s not because I hate the idea. It’s because I need time to grieve before I can add anything to the discussion. That’s why I prefer an email with a follow up phone call after I’ve had time to think, but hey, it’s your money and you can have it anyway you want it.

* One of those was because the producer told me the rough, not-even-first draft was a work of genius and, foolishly, I believed it must be exactly what he wanted. The director pointed out it was shit and the producer immediately agreed with him so as not to look like a moron. The other was when I gave the director exactly what he asked for … which was a mistake because he didn’t actually understand that what he’d asked for was an extra 90 pages added to the script. Even after I told him. Twice.