Posted on Friday, 11 November, 2016 by phillbarron

So this meeting happened earlier the same day as the last one, hence the confusion of numbers since I like to be chronological about this sort of thing.

James Moran is one of those guys I see around every now and then with the occasional flurry of Twitter DMs and even the odd phone call. He’s a nice guy*. I like him. I like to think of him as a friend, but perhaps don’t see him often enough to have reached that status? I don’t know, I get a bit confused by social interaction.

Some of what we chatted about is the kind of stuff you don’t really repeat, you know, stuff like what projects we’re working on, who we’re working with and who never, ever to work with.

These kind of chats are the reason I never record the #PhonePhill conversations because, while they would make a good podcast (their half of the conversation, not mine – mine is generally moronic) and provide an insightful look into the lives of working writers … I’d just rather they were confidential. I like chatting to people when neither of us are guarding what we might say, it’s more fun.

For me, obviously. Not necessarily for you since you don’t get to read or hear about all the juicy bits.

James, for example, has killed 17 Belgians in the last few years. No one knows what he’s got against Belgians since they seem like generally inoffensive people to me … but he can get awfully stabby in their presence.^

Amongst the deeply personal, unprofessional and unrepeatable witterings, there were two things which bear repeating and may be of general interest.

The first, as mentioned elsewhere on this blog, is the state of genre TV in the UK … basically, it’s a rare beast.

Except on kids’ TV.

For reasons best known only to commissioners the general opinion in the UK seems to be that kids love genre shows (sci-fi, horror, super powers …) but that adults grow out of it.

Which doesn’t make sense to me, a card-carrying geek. It also doesn’t seem to be true if you look at cinema or US TV … but in the UK, adult genre fare is hard to find …

… and even harder to get made.

My perception is though that kids’ TV is the place to aim for if you want to write genre stuff.

The second observation is a vitally important one. It’s applicable to all meetings, whether formal or informal, be it with a prospective client or a friend.

Picture the scene, James and I have arranged to meet in yumchaa in Soho (where he bought me a cup of tea and a most excellent slice of cake) and I’d arrived first. I mooched around looking for somewhere to sit and eventually opted for a comfy looking sofa. 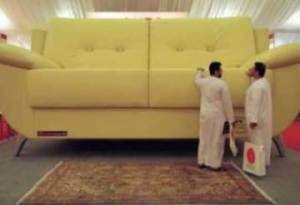 The sofa was as comfy as it looked … and there in lies my mistake because there was only one sofa and a coffee table, forcing James to sit NEXT TO ME ON THE SOFA.

Sitting next to someone on a sofa is great if you want to both watch TV. Even better if you both want to cuddle.

As much as I like James, I do not want to cuddle him.+ 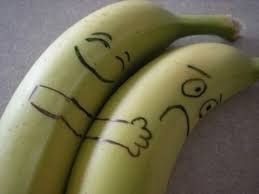 Chatting to someone who’s sitting next to you is ridiculously uncomfortable, no matter how comfy the sofa. One of you has to contort yourself into unnatural shapes in order to face the other person. Obviously, being the bigger sociopath of the two, I made myself comfortable and let James to the contorting.

Imagine if this had been a client meeting and I was trying to persuade someone to part with their cash? It’s just not a good idea.

For chat, chairs are where it’s at.

Preferably sit-up ones at a table rather than comfy armchairs you sink into.

I’ve made this mistake before at a meeting with a development exec at a large TV company. She sat on a sensible chair in her office, I sat on a low-slung sofa … and ended lolling around on it as if I was in therapy.

It’s hard to sell your skills when the person you’re trying to impress is looking up your nostrils.

For chat, chairs are where it’s at.

And … well, all these: https://minasjournal.wordpress.com/episodes/

Turn off the lights, make yourself comfortable (on a sofa is perfectly acceptable) and treat your eyeballs to his incessant genius.

Meeting James was lovely. I probably don’t want to meet you, but I do want to chat with you on the phone.

Not that person, you. The one with the face.

If you’d like to #PhonePhill then email me and we’ll work something out.

*For a given value of ‘nice’. Obviously as a horror writer he’s a psychopathic lunatic … but lovely with it.

^Not true, obviously. He only killed 16 and only stabbed one – he doesn’t like to repeat himself. Apparently it’s ‘research’.