This is probably our most effect heavy #TARDISshorts yet. Which, coming just 3 days after the last one was exactly what I said I didn’t want.

Still, it was fun so who cares?

Wednesday evening we found out An Adventure in Space and Time would be the next one, which in one way was great because I’d already thought about what to do … but in another way was less great because as I explained last time I’d already burnt that idea.

So Wednesday I went to bed needing an idea for the following Saturday. Thursday morning I still didn’t really know what I wanted to do, which was a problem.

Time, as always, was running out.

I should reiterate at this point, no one is paying me to do this. No one is even expecting me to do it, but I’ve got into the habit and it’s now become my weekly challenge.

A weekly challenge which was now happening every three days.

So I had to do something, even if I had no idea what. The only thing I had in mind was this scene from An Adventure in Space and Time:

That scene made me cry when I first saw it (and every time since, although it’s been a while) and I just thought it would be funny to subvert it and have my daughter waiting nervously there instead.

I built the rest of the story around that and a few scraps of 1960’s London footage I could find.

With no time to really think about it (I was busy the rest of the day on Thursday), that would have to do.

I asked my friend Mark Sweeting (who you may or may not have seen in our Dalek Loop #TARDISshorts):

Which caused another problem: I had no idea what they looked like.

I should point out at this stage that I’d completely forgotten William Russell plays one in An Adventure in Space and Time. I wondered vaguely if there was a guard in there somewhere but a quick scan through at super high speed didn’t reveal one, so I took to the internet and this was all I could find: 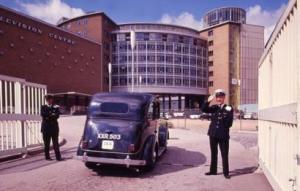 Which gave me the general shape, if none of the details.

A bit more research and I found these: 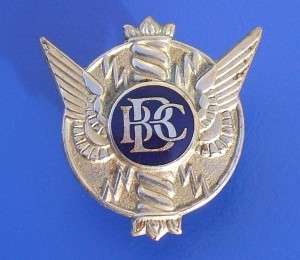 Which are either cap badges or collar badges or possibly both. But which one to use? The top one is apparently from the ’50s and the bottom one is from the ’70s. Which did they use in the ’60s?

No idea, so I picked the bottom one because it’s a clearer logo … one which can’t be seen on screen anyway.

I lucked out with the hat because my dad used to be in the merchant navy and I have his old cap:

Well, technically Iron Man has it, but I managed to get him to swap it in return for some new pants:

I didn’t want to damage the cap (because of its significance to me) but luckily the cap badge is on a reversible band. So I printed out the BBC badge, stuck it to some card and then, in best Blue Peter fashion) used double-sided sticky tape to affix it to the reversed cap-band.

For the rest of the uniform I broke out the sewing machine and dug through my bags of scrap material until I found the bits I needed to customise an old black suit: 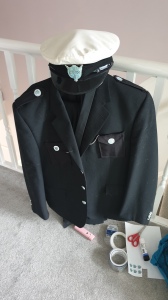 That, I thought, would do. I covered the buttons with silver tape (and added the BBC logo for good measure), added the epaulettes, the chest pockets and the chain. As an afterthought I added one more button because the image I found had four and four just looks more security guard than three.

This was all late Thursday night. I also cobbled together a psychic paper wallet because my daughter really, really wanted to use one. In every film we’ve done, so it was about time.

It’s a bit wobbly, but it was late and I was tired. It’d have to do.

And I had the footage to insert into this photo of the Lime Grove entrance: 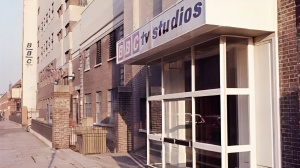 I ended up trimming the wider establishing shot so I guess it could have been any entrance anywhere, but I know it’s authentic even if no one else does. I even went to the trouble of putting a reflection in the window because … well, that’s what windows do, isn’t?

But when I came to add us over the top I realised there was no way to create our reflection properly. If you watch closely (or not closely, depending on how obvious you feel it is) then our reflections are actually a separate take from the opposite direction. They don’t match and seem to be living in a different time line.

It was a nice surprise when we finally watched An Adventure in Space and Time on Saturday to see how close my guestimate costume was to the one they used:

Just needed some military ribbons really. Having said that, they went with the older cap badge and significantly more buttons. Not sure if the button count is accurate or if they just repurposed a naval/police officer uniform?

Either way, I’m happy with what I cobbled together in a few hours at short notice.

Friday afternoon my daughter and I trashed the TARDIS: 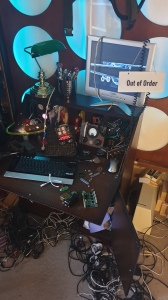 Threw up the green towels …

As you can see we’re extremely limited by both space and the size/quantity of the towels. We had to be very careful how we lined up the shots to make sure neither of us went out of the green areas. Sometimes we even had to shoot it kneeling down:

Even then when it came to dropping us into the old 1960’s footage I had to crop each image twice. Because I can only crop in prearranged shapes I had to do one tall skinny rectangle to get my height and a second wide mid-level one to get my daughter’s head/shoulders in without seeing the TARDIS window peeping through.

To get us talking in front of the side of the TARDIS which doesn’t exist, I reused this model shot:

… layered it over the top of our real doors …

… and then us again over the side: 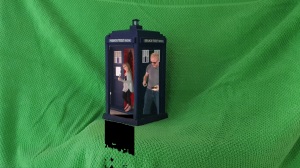 Before overlaying all of that over the street footage:

The windows still don’t quite line up but I’m getting closer. One day I’ll get it right.

There was only about 15 seconds of the street scene so that was on a loop. It’s also mirrored (you can tell by the shop signs) because it’s impossible to shoot the TARDIS from any other angle due to the layout of our house. I can’t flop the TARDIS footage because the signs and the doors would be backwards!

For the David Bradley/William Hartnell shot I made a custom mask using Paint.net (just cutting and pasting bits of the console) so I could have my daughter behind all the controls:

There’s a crop line just to her left (our right) so I could have a still image of the column stopped rather than going up and down.

I finally finished all the editing at about 3.30 am on Saturday morning and then crashed out for a few hours.

Early the next day I realised I didn’t really like what I had. There was a different bus scene where I’d tried to make a joke about the Back to the Future thing of carrying a suitcase full of money around with us, but it didn’t really work. Plus the scene I’d dropped us into didn’t really work.

There was also an extended “inside Lime Grove” sequence which was fine … but unnecessary.

I was trying to find a gag about the guy wandering around the corridor, but I can’t remember who he is! I know he’s from Nationwide, but couldn’t be arsed searching up pictures of all the presenters until I found out in the vague hope I coudl make a weak gag out of it.

I think that’s from the late ’70s anyway so it doesn’t really look right.

Quite late on Saturday morning I decided to add the On the Buses gag. Wrong time period again, but only a little bit and hopefully fudgeable.

I quite liked that so I added the Austin Powers snippets too, which helped bridge some of the longer dialogue in the TARDIS. Because we don’t script these, my daughter and I tend to waffle on a bit. Sometimes it’s hard to cut it down to a manageable snippet.

Which is slightly less succinct than a 140 second running time demands.

If I were to revisit this I think I’d have had us wandering through footage from every ’60s film and TV show I could think of … but I’m not going to, so I won’t. It’s an idea which came to me too late to use.

Overall I’m not sure how successful this one was. It feels very last-minute cobbled-together to me … but then that’s largely because it was.

Still, at least I’ve got until (checks notes) Tuesday to do the next one.

Categories: TARDISshorts | Tags: An Adventure in Space and Time, Austin Powers, Doctor Who, London 1963, On the Buses, TARDIS shorts | 1 Comment