Posted on Tuesday, 5 November, 2019 by phillbarron

One of the most frustrating things about scriptwriting is never being able to share the good news until it no longer means that much to you.

I mean, yes it’s exciting to get a film produced or released but often by then the sheen’s worn off a bit and everyone involved has compromised on a lesser version of the project than the gleaming potential project everyone signed on for.

Okay, so this might be an experience exclusive to me, but the ‘finished’ interpretations of my work have been … disappointing. What seemed exciting at the script stage or the casting stage or even the shooting stage can be significantly less so by the time of release. If for no other reason than it’s years later and it can be hard to maintain the excitement for that long.

The bits I want to shout about and get excited about in public are the bits I’m frequently not allowed to talk about.

“Don’t blog about this until we say so!” is often the refrain.

Which is annoying because, more often than not, the finished product never materialises. There are so many hurdles for a film to fall on that actually getting one made is very, very unlikely. At which point it becomes bad form to talk about them.

So a writer who’s been working continuously can end up with massive holes in their CV, looking like they haven’t worked in a decade when it’s actually been the most exciting decade of their career. I haven’t quite racked up that much time since my last produced film, but since I can’t talk about the uncredited rewrites on produced and released stuff it certainly looks like it’s heading that way.

Annoyingly I can’t tell anyone about that time I had a director hand me a laminated a book of script feedback, all of which were 10 out 10 or 5 out 5 reports from various readers or production companies.

I can’t tell you about the time that proper, genuine, A list Hollywood actor agreed to play a small role in a film … only to find out we couldn’t afford him.

I can’t tell you about the time a second (better) A lister agreed to do the same small role and then decided he wanted to play the lead instead. When we told him we couldn’t afford him, he lowered his fee until we could.

I can’t tell you about meeting one of my favourite actors and having him tell me something I’m still not sure I heard correctly.

Nor can I talk about the time I was actually wanted on set because the director (weirdly) assumed I had a rapport with (and could therefore ‘handle’) an A list actor who was notoriously difficult on set. 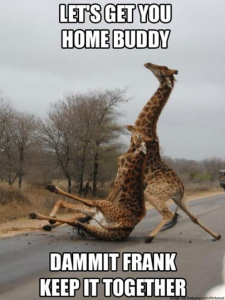 I can’t tell you about any of those things because ultimately all of those projects fell apart before completion. One of them fell apart three times, the last time for no apparent reason … or at least no reason anyone is prepared to tell me.

I want to tell you everything, but I can’t. Which is frustrating.

This is the problem with being a scriptwriter. We live with constant rejection and negativity, failing more times than we succeed. And when we pull off the herculean task of getting a film made … we get pilloried for it online by people who ascribe blame to us for things we had no influence on, like casting, editing, line delivery, improvisation, music choice, wardrobe and, you know, pretty everything else which goes into film making.

So I’m taking inspiration from a Facebook post by writer-director and all round nice guy Jonathan Glendening who posted snippets of positive feedback he’s been getting on his latest project. It’s a great script, hopefully one he’ll get some traction on, but even if he doesn’t it was nice to read other people’s opinions on it.

I read that and I thought, what the hell, why not?

Why not blow my own trumpet for once? Why not share some of the positive news for my latest script, the one I’m currently shopping around and could do with some publicity?

So here it is, a few snippets from the feedback I’ve gotten from my new coming of age, time-travel, comedy-horror feature script. A script I’m really proud of and would really like to see produced.

… original and laudable for its ambitious blend of genres, while still managing to be production friendly.

… the writer’s voice is organic, true to itself, and consistently leaps off the page.

… a deftly written coming of age horror comedy with a stellar sense of humour.

The horror content is over-the-top gory in the best way and comic in its excessiveness.

The ending is satisfying and upbeat.

… has the potential to become a cult sensation a la SHAUN OF THE DEAD or EVIL DEAD II.

I am immensely proud of this script and really enjoying reading people’s responses to it. Hopefully you’ll get to see it one day* and hopefully the finished product will provide the same reaction as the script.

But in the mean time I’m going to revel in the small victories and enjoy a brief moment of praise. If you’ve got something you want to crow about, no matter how small or irrelevant it may seem, feel free either here in the comments or as a reply on whatever social media platform led you here.

Come on, don’t be shy. You’re amazing, blow that horn!

* The film, not the script. I mean, you can read the script if you like, you just need to ask. Hopefully the film will one day be produced in a manner which does the script justice.

Categories: Industry Musings, Progress, Publicity, Writing and life | Tags: blowing of, go me, going against the grain, horns, is this egotistical?, Publicity, someone likes me!, trumpets, yay! | 6 Comments