Posted on Thursday, 26 October, 2017 by phillbarron

I had a lovely, if brief, chat with Dominic Carver not-so-recently – probably a couple of months back now. In fact, no probably about it – it was ages ago.

NB: This post was written the day after that call … and then I got distracted. I started making a vague attempt to update the tenses so it makes sense … then gave up. Just bear in mind most of this was true five months ago, not necessarily today.

In other words: don’t worry, I’ve been working on your project all day. Honest.

As ever (or for the second time at least) the man was entertaining, erudite and delightful. The brevity was mainly due to half-term child and family commitments*, which are both unavoidable and should never be avoided. What’s the point of being a writer if you can’t slope off to spend time with your kids every now and then?

Dom, as ever (see caveat above) has an exciting array of projects simmering away.

It’s not that there’s wasn’t work out there and it’s not like I wasn’t being offered anything. It’s just … eh … I couldn’t be arsed at that point. 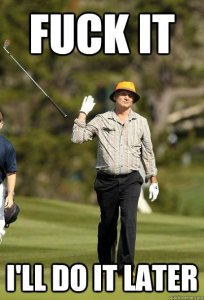 Dom and I spoke about this ebb and flow of ambition. Sometimes you want to write 24 hours a day, 7 days a week as the words burn white-hot in your brain and you find yourself getting furious with your own bladder for occasionally demanding time off to drain itself of the ludicrous amount of tea you’ve tried to drown it in.

Other days … it’s all about the procrastination.

To be fair, most days it’s about the procrastination. Any excuse not to write is a good excuse. 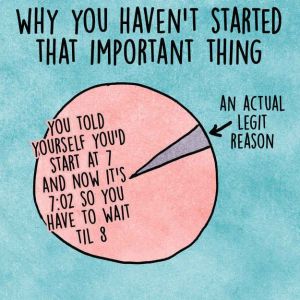 Usually those days will eventually result in some writing.

And then there are the periods when the desire to write just evaporates completely. When the burning need to express myself via hitting a keyboard just isn’t there. 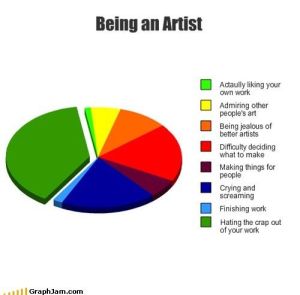 And then it’s hard having to start the whole process all over again.

Sometimes, usually when I’m generally content with life, it gets hard to want to throw myself back into the mill. You don’t put your nose to the grindstone as a scriptwriter, you get dragged between two grindstones and pulverised.

When life is lovely and fulfilling, when there’s lots of other exciting things to do … well, I just can’t be fucked.

Not that I’ve not been doing any work at all. I have a feature film casting at the moment which is shaping up to be the best thing I’ve ever done with a perfect cast. There’s another feature which is being touted around LA and yet another I’m slowly excavating from the mountain of possibility with a director who started out as a #PhonePhill but is now (probably) a friend.

Then there’s that TV show, the one I feel I’ve been accidentally writing for the last twenty years. The one which feels like its nearly perfect … even though I’ve not written a single word beyond a one page synopsis. 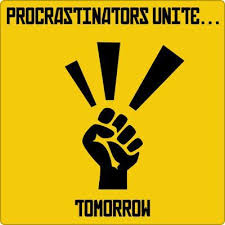 By rights I should be shouldering all other commitments aside to focus on that one … but then there’s that ennui.

Don’t get me wrong – there are flashes of inspiration and perspiration. Moments when I suddenly burst into feverish scribblings … but those are mostly when there’s an interesting casting choice which requires a character tweak or the odd simple paid rewrite job. Those I’m all over. Those I snap to attention and type until my fingers ache.

The rest of it, especially the stuff I’m doing just for me … not so much.

But you know, as was discussed with Dom, those times are okay. Sometimes you care, sometimes you don’t. Always do the stuff people are waiting for … the rest … just don’t be too hard on yourself.

The trick is to know the difference between procrastinating and general demotivation. Procrastination is just silly: man and/or woman up and knuckle down. Demotivation periods … that’s fine. Just do something else. You don’t owe anyone your literary genius and no one will care+ if you down tools for a week or a month or even ten years. Just come back to it when you’re ready.

Or don’t. Find something more fulfilling to do, it’s your life.

Just accept it’s all part of the ebb and flow of a writer’s self-motivation. Beating yourself up to it just leads to depression and anxiety, give yourself permission to slack off.

Them’s my thoughts anyway and Dom seemed to agree. Or maybe I just ranted at him until he had to go spend time with his lovely family? That’s probably it.

Either way, catching up with Dom was cool and yet another enchanting #PhonePhill. If you’d like to have a natter, why not drop me a line at the email address in the sidebar and we’ll arrange a time to chat? Doesn’t matter what your experience level is or whether you’re a writer or not. Whoever you are, wherever you are, whatever you do and however long you’ve been doing it, if you fancy a chat, I fancy listening.

* His, not mine. I’d retreated to my Secret Writing Island to avoid mine. My commitments, not necessarily my family and certainly never for extended periods.

+ So long as there’s no one actually waiting for your work. Do that. Always do that promptly and professionally.

Posted on Wednesday, 18 October, 2017 by phillbarron

Oh hello, it’s been a while. Haven’t the months been kind to you? I like what you’ve done to your hair/shoes/teeth.

I moved house back in April and blogging seemed less important than unpacking and DIY. I’d like to say I’m back now, but I’m probably not. In the meantime though, here’s a quick video of me moving my office from the old house to the new.