A deskbound British agent and two reject cops from the 1970s may be the Earth’s last line of defence against a massive alien invasion in this independent sci-fi action comedy.

An adventure ten years in the making, this film is probably the most fun project I’ve ever worked on. Nice guys in a nice environment with no egos. L.V.J. is a true passion project made by some very busy and talented people (them, not me). Basically just a bunch of geeks trying to make the kind of film we all loved as kids.

I co-wrote this with Mark Shields and Chris Taylor, each of taking on different aspects of the script – hopefully it meshes together in an awesomely explosive ride.

We’re talking about the kind of project where someone suggests a gratuitous nuclear submarine and no one even mentions the budget.

True, it may not be finished in our lifetime, but your kids are going to love it.

Check out the First Look documentary below: 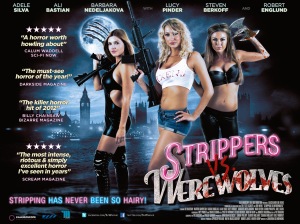 A Horror/Comedy about … well, do you really need to be told?

This was the promo  for AFM:

Not exactly the best film ever made.

Just for the Record

What can I say about Just for the Record? How about, sorry?

It was intended to be a jokey look at the making of a failed feature film, but ended up being a failed feature film in its own right. It didn’t help that all of the footage from the actual making of the film was cut out. Nor did it help that the protagonist was edited out and only partially reinserted. Add to that a total lack of tonal consistency (some actors are playing it straight, some seem to be in a pantomime) and one of the main characters sounding like he’s on the end of a telephone and you’re left with a film which is … well, at best it’s occasionally amusing but frequently boring.

Then there was the marketing.

Danny Dyer played against type in this film as a slick, well-groomed executive-producer. I think that’s probably part of the reason he agreed to do it – a chance to do something different. However, someone somewhere thought the only way to sell the film was to pretend he was a main character playing, well, Danny Dyer.

So they came up with this for the DVD cover: a photo of Danny from a different film and emphasising words like CUT and ACTION. They even put a gun on the front cover. A fucking gun! This had the amazing effect of pissing off everyone who bought the DVD expecting it to be a Danny Dyer gangster movie. It wasn’t a good film to start with, but setting up audience expectation for a different film really doesn’t help.

For anyone who bought the DVD under false pretences – I’m sorry.

Still, it did get a cinema release and I got to see it in the same cinema I saw Return of the Jedi and Back to the Future, so it’s not all bad. It was even in the DVD charts for a while.

Low points: being asked to double the length of a 90 page script and then listening to everyone totally surprised when it ended up nearly 180 pages; introducing myself as the writer at the premiere and watching people cast about for something nice to say … most couldn’t.

Here’s the trailer if that hasn’t put you off:

I didn’t really have a lot to do with Stalker – it was written and directed by Martin Kemp, I just came up with a way to reinterpret the original ‘House on Straw HIll” or ‘Exposé’ depending on which country you’re from.

For that, I get a Screen Story By credit – which is very nice.

A strong British cast, which is pretty much what you expect from a Black and Blue film: Jane March, Anna Brecon, Colin Salmon, Billy Murray, Jennifer Matter, Danny Young.

And that’s about all I have to say about that. Here’s the trailer:

Intended to be the first in a trilogy of British Action/Thrillers – but it probably won’t be now. Who knows? To date there’s no poster, trailer or indeed film; but it’s nearly finished so we’ll see what happens in the near future.

K stars Tamer Hassan and Colin Salmon and is about a man who “fights his way up through the ranks of organised crime, his every move dogged by a mysterious and powerful opponent who’ll stop at nothing to find him and the secret he unwittingly protects.”

It’s got some stuff about pirates in too. Although no actual pirates, unfortunately.

A chase sequence I originally wrote for this has been written into two other scripts and each time I get told it’s too expensive to film. One day I’ll find a home for it. One day.

This script was one of six or seven written in a panicky rush for a producer who was going to Cannes and wanted to take a pile of scripts with him. I think it was possibly my first option, although I can’t really remember now.

The script sprang fully formed from a dream I had and features a host of giant furry animals trying to rob a bank, only none of the people in the costumes are actually bank robbers and are all undercover for various organisations including the police, a newspaper, the church and … oh wait, no that’s it.

I’m not sure what the status of this film is or if it will ever see the light of day; but it’s a fun, if early script of mine and one I’m quite fond of.

There’s a trailer of sorts here:

I didn’t write this one either. Night Junkies was written and directed by Lawrence Pearce and stars Giles Alderson and Katia Winter – both of whom are doing quite well for themselves.

Night Junkies is a modern vampire tale which treats the vampires more as junkies than demi-gods.

I was the script editor, so I don’t really have a lot to say about the film other than here’s the teaser trailer:

The Evolved is … Christ, where do I start?

Um, well there are two cops investigating a dog-napping ring who accidentally stumble onto a plot by The Pope who gets teenage girls hooked on heroin and then impregnates them so he can harvest their foetuses for burger meat and sell them through his fast food franchise: Burger Priest.

Oh and there’s a semi-evolved shark-man and a talking foetus too.

Does it make sense?

Is it funny? Yeah. The plot meanders a little because of the way it was written – everything was filmed before we’d finished writing the script, so when it came to the last day of shooting, with no idea of how to end the film … we just stopped it and said End of Part One. There will never be a Part Two.

That DVD cover is a work of art in itself – the puppet isn’t a Nazi (although the Pope’s clown/chef army are) and I’ve no idea what that body is. In case you’re wondering, the wheelchair-bound puppet came about because none of the cast (of three) wanted to dress up as a woman. Inspired solution I thought.

The entire budget for the film was £1000 and that included buying the camera. Bear that in mind and it’s an impressive achievement. The DVD is distributed by Troma and here’s the trailer:

We were going to make another film together, but we didn’t. Here’s the aborted teaser trailer for The Last King of Wales: