I’m a little bit behind with this, our #TARDISshorts series being finished, but for the sake of completeness I thought I’d finish these posts in order.

On Tuesday the 26th May 2020 Emily Cook announced the next #DoctorWhoLockdown tweetalong would be a double bill of New Earth and Gridlock on Saturday the 30th.

This gave us four days to come up with the next #TARDISshorts episode, but for reasons I can’t quite remember we didn’t start filming until the 28th … and then decided to make it a two-parter.

This is what we came up with:

I loved the idea of doing a two-parter because cliffhangers are what made Doctor Who so terrifying as a child. Three out of every four Saturdays we went to bed thinking the Doctor was dead or dying. Not like you namby-pampy youngsters who get a happy ending nearly every week.

Life was tough back then.

So I knew we wanted a cliffhanger … but that’s about all. We made a list of things from the two episodes: viruses, cats, hospitals, the last human, cars, the beach where I proposed to my wife … and it seemed like a good opportunity to do a zombie story.

Now, I must confess I’m not great with zombie films. I think I like them but about halfway through I start hoping the heroes get killed because the whole world is so terrifying and hopeless that death seems like the best and inevitable option.

But these are Doctor Who themed shorts so they have to have hope and solutions. Plus I didn’t fancy shooting my daughter in the head in order to just get it over and done with.

So the second half had to hint at some kind of winding up of the series. Not that it’s really been a series or even had much of a story, but I guess I wanted to finish on something a bit more coherent.

And that’s what we ran with basically. Zombies, cars, ending the series.

The cliffhanger felt like a fun one so we built up to that and the final resolution came from something my dad said to me in the late seventies. We’d just found  out there would be a sequel to Superman the Movie and were speculating about its content. My dad thought it might be Superman getting into trouble for interfering with human history.

Not sure who was going to be cross with him since his entire race was dead but it sounded like a cool story.

So that went into the pot.

A vague idea about cars, zombies, a cliffhanger with us stuck in a car and Timelords being cross with us inside clouds was about as much information as we needed to start filming.

The first shots we did were the car shots … which meant I had to clean it first. There are a LOT of seagulls around our way and they hate cars with a moist white passion. By the time we’d done all our other jobs that day and washed the car it was about 5 in the evening so we were a wee bit behind schedule.

We did the inside shots first, some of which were easier than others. Shots of me driving are fine, my daughter just holds the phone.

Shots of us both in a moving car are easy because I have a vent-mount for my phone. Even if it does cut me off a little.

Shots of my daughter while I’m driving … not so easy.

We had to break out the trusty green towels for that one. I suppose I could have held the phone and driven with the other hand, but that’s both illegal and stupidly dangerous … so chroma key was the answer.

It was stupidly hot that day and we couldn’t put the air-conditioning on whilst the phone was on the vent mount because it would sound like we were in a hurricane, so for the stationary shots we just wound the windows down. After all, I thought, it would be easier to green screen the road without all those reflections.

Not sure that’s the right kind of thought to have at these times, but hey ho.

Dropping the travelling road in was a bigger problem. Initially I thought about getting my daughter to film the street while I was driving … but then how would I put the zombies in?

As I’ve mentioned before, these are all filmed and edited on my phone. The app I use, Kinemaster, doesn’t allow for tracking when layering on green screen effects. In other words, if I put the zombies into a moving shot, they would float along keeping pace with the car.

I needed a stationary shot which I could then pan along. So that’s what I did … and then found out a single shot is in no way long enough to pan along. As soon as you zoom into one end it looks like I’m driving in people’s front gardens. Or scraping their houses with my wing mirrors.

That was a moment of despair late on Thursday evening as I was trying to cobble together the effects.

My solution the next day was to take a few panoramic shots:

That way I had plenty of time to pan along adding stationary zombies to the image. The mistake I made there was standing in one spot and turning to get the panorama. This resulted in the curved images you can see. What I should have done is start the panorama and then walk along the road in a straight line … but I’m not sure that would have given me enough distance from the superimposed car to the houses. Not sure how I’d deal with parked cars on my side of the street either, without shooting above them and making it look like my car was six feet off the ground.

The stationary shots of us being attacked by zombies were easier. We just filmed from the vent-mount and then from each side …

That’s me trying to be upset about zombies without upsetting the neighbours.

I was horribly aware doing these shots that we had the windows open (to prevent death by boiling) and were in a quiet residential street. Hence my whispering my “Argh there are zombies!” screams.

A few years ago my brother moved to America, so I made him a Blake’s 7 teleport bracelet as a reminder to keep in touch.

I also took the opportunity to make one for myself and a spare for a friend I thought might want one. Which he did. 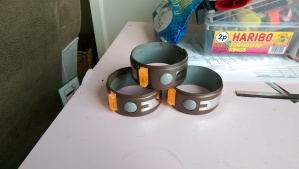 This seemed like a geeky way to teleport from the car to the TARDIS in part two.

Moving to the exterior of the car we set up a tripod … well, not a tripod, a selfie stick duct taped to an old speaker stand … on the pavement and then ran around trying not to look too weird to the neighbours.

The nose shot of us pulling up outside our house was done the same way. A friend expressed surprise that we’d just leave my phone sitting on the pavement while we drove off … but it’s a nice area. Or a crappy phone. One of the two.

Everything inside the house was simple, just point and shoot. The only time the towels came out were for the TARDIS interior so we could see an elevated view of Eastbourne out of the window. 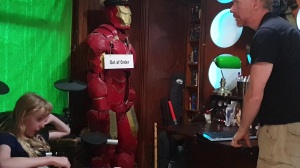 … and then combined it with the same green towel model shot we’ve used throughout these shorts. 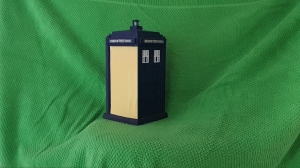 We can only film my office door from that one specific angle and although the model angle isn’t quite right, it’s close enough to not make it worth reshooting.

In Gridlock the situation is solved by visiting the government building and discovering the truth. Initially I’d toyed with doing something similar. I thought we might go to the zombie-infested Houses of Parliament and find the outbreak was caused by an idiot chemist called Boris Johnson. We’d go back in time and stop him becoming a chemist, return to the present and find out he’d become the PM instead.

Or something. As you can tell, it wasn’t a thought I entertained for long.

I looked for footage of young Boris, but not very hard and couldn’t really find anything useful so I gave up that idea.

Besides, intimating that the PM was the cause of a deadly virus seemed unnecessarily upsetting in the present climate.

Having Mr Bean cause the accident came about because I was just looking for footage of idiots and chemistry I could borrow and this came up.

Making him an alien … well, he is isn’t he? Isn’t that the premise of the character? Imbecile alien investigates Earth?

By the end of shooting on the first day I still didn’t really know how to get from the emergency teleport scene to this green towel shot of my daughter throwing Mr Bean off the planet: 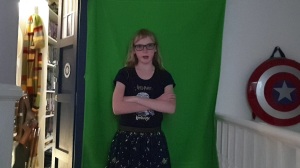 Nor did I know how to actually put the zombies into the footage. I thought I’d figure it out.

In the house, fine. In the street, no problem … but outside the car window while we’re moving around in front of them and the camera is handheld?

When I eventually went to at stupid o’clock the next morning I was in a bit of a panic … but I’ll deal with that in part two.