Posted on Wednesday, 27 January, 2016 by phillbarron

Fans are a funny old lot, aren’t they? Ever since I built my proton pack last year …

… I’ve been dipping in and out of the Ghostbusters forum and there’s a contingent of fans on there who are absolutely outraged that there’s going to be an all-woman Ghostbusters reboot.

And yes, for some the fact it’s a female team is a huge problem. Presumably for extremely valid and adult reasons like “ur, girls suck!” or “girls are stinky” or something?

Others hate Paul Feig for … reasons.

To a point, I understand the reboot-phobia. To a point. I get that this is a beloved thing, something some of them have devoted their entire lives to loving. Personally I’d prefer the new movie wasn’t a reboot but a continuation, the story of a different franchise operating out of a different city.

Hell, maybe it is – I haven’t really been paying attention.

But to me a reboot doesn’t diminish my love of the original. In fact, given my feelings on the Star Wars prequels, perhaps a reboot is better than another story in the same universe? It’s become increasingly difficult to think of myself as a Star Wars fan over the years, tipping now to the point where I’m not sure I really am any more.

If it’s a reboot, the original is still there. No one’s tampered with it, or diluted it or otherwise retconned it to be something else – you can still love it.

Others are lovely. I suspect, as is common, it’s only the really vocal ones who are unpleasant. Some fans are so vicious they don’t seem to actually like the thing they profess to be a fan of at all.

Take the latest Doctor Who news, for example: Steven Moffat’s leaving, Chris Chibnall’s arriving. The internet is up in arms. They’re absolutely furious, Chris Chibnall is a hack who will definitely ruin Doctor Who.

But here’s the thing, before Steven Moffat ruined Doctor Who, he was the saviour who was going to fix all Russell T’s wrongs. Which he may have done … or he may have created a whole new list of wrongs depending on your point of view. For some people, his run has been amazing and the best the show’s been for ever and ever. For others, he deposed the true saviour who brought the show back from extinction.

The point is, opinions vary and few of them are accurate predictions.

Personally, I think writing Doctor Who must be incredibly difficult. Show running must be even more so. There’s no doubt in mind that both Russell and Steven are amazing writers … yet some of their episodes were dreadful. Some. Others were amazing.

I think being a Doctor Who fan is like being in a bad relationship – we go for long periods of time putting up with terrible to mediocre stories … and just when we’re summoning up the courage to stop watching there’s a piece of genius which reminds us why Doctor Who is the best TV show ever made.

And I believe that, I really do. It’s the best TV show ever. Your contradictory opinion is just wrong.

The problem is, it’s not always the best TV. Individually, when taken episode by episode it can sometimes be creaky or just plain shit.

Like I say, writing it is probably really hard*. And when things are hard, sometimes people fail at it. Professional golfers sometimes slice the ball – it happens because no one, no matter how good, is at the top of their game all the time.

Part of what makes Doctor Who as good today as it was in 1963 is the constant turnover of talent both before and behind the camera. Change is good. We should celebrate change because, crucially, we have no idea what it may bring.

Chris Chibnall, regardless of how you feel about Broadchurch or Torchwood or his previous Who episodes, may turn out to be the best thing ever to happen to the show.

This though is (to me) the absolute underlying truth: it hasn’t happened yet. 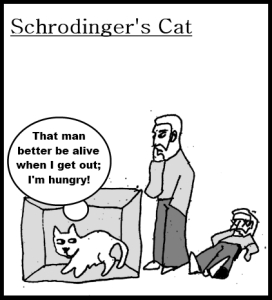 Currently the probability waveforms have yet to collapse and we’re left with multiple options: it may be good, bad or somewhere in between … but we don’t know which because it hasn’t happened yet.

Fans of Chris’ may be disappointed. Haters may be swayed and surprised … there’s no way of telling.

So why get bent out of shape? Yes, you love the show and yes, you’re worried about its future. I get that … but do we really need all the hate and prophecies of doom? 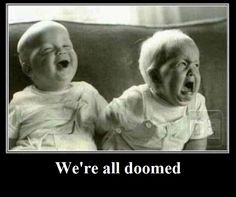 Instead of spending the next year or two stewing in hatred and fear, why not stay positive and look to the future … you can always sell all your merchandise in a fit of pique later, if needs be.

* I’d love to write an episode. Maybe two … but I wouldn’t want to be the show runner for love nor money. I’d burn out in seconds. And imagine  if you got a job doing the thing you love most for the programme you love most … and the entire Internet explodes in waves of hatred over it. That can’t be a nice thing to go through.