On Sunday night we found out the next episode in Emily Cook‘s Doctor Who tweetalongs would be Steven Moffat’s LISTEN.

I have to admit this through me into a bit of a panic. 3 days is not a lot of time to conceive, film, edit and add effects to a short film. Even one which has to stay under the Twitter limit of 140 seconds, but we managed it.

With a little bit of pre-shot footage cheating, but that’s neither here nor there. Unlike BOO!, which is here:

The genesis of this idea came from mulling over what I might do for various episodes. I’d been wondering what I might do if it was An Adventure in Space and Time, for example. How would I replicate 1963 in my house?

Not that it had to be 1963 because we’re only making these TARDISshorts themed around one element of the episode being rewatched. If, say, we were making one themed around the ‘beginning of something’ then we could pick anything. Centring that around my daughter could mean the conception (we’re not really making those kind of films) or how her mum and I met (difficult to replicate something from that long ago) or maybe even our wedding. For which there is footage and …  yeah, I could probably drop my daughter and I into that old footage.

So that was an idea in the bank. Not much of an idea, just a vague thought.

When LISTEN was announced as the next episode I was a bit stumped. It hadn’t even crossed my mind and I had no idea what to do.

Helpfully my brain threw this old idea at me and combined it with my daughter’s annoying habit of jumping out at me like a pint-sized Kato (Cato?).

I rarely flinch externally. Internally all my organs leap about like startled cats, but externally I tend to react pretty much like I do in the film. This drives her mad. If she had a time machine she would do exactly what she does in BOO!

So the idea had arrived! Unfortunately at about one in the morning which kept me thinking until about 5 am … but it had arrived and that’s the hardest part.

The next day I went looking for our wedding footage (the oldest footage I have of us) only to find it had gone missing. I could find the ceremony and the song we played at the end …

… but none of the middle stuff: the speeches, the first dance, the confused game of croquet (only one person knew the rules and he was unable to explain them adequately). 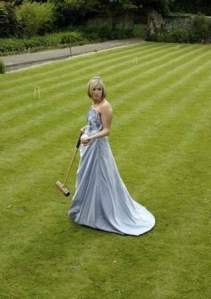 And to be honest, the snippets I did have were terrible quality.Luckily I’ve still got the original DVD, very kindly made as a wedding present by a production company I was working for at the time.

Unluckily … a DVD! Fine, we have a DVD player, but how do you get info off a DVD onto a laptop during lockdown in 2020?

Nothing I own has a DVD drive. Nothing.

Luck came to the rescue again because one of my best friends had an all in one PC with DVD drive AND the inclination to help. A quick socially-distant visit (through a window, no less) and I had the footage on a USB drive … at five o’clock on Monday evening.

Still, I had the footage. Now all I had to do was find about one minute of shots out of the total forty-five minutes which would cover the entire wedding from start to finish, convey the flavour of the day with each shot being still enough and having enough blank space to digitally insert my daughter.

This was beginning to sound less easy than I’d hoped.

That night Mandy and I rewatched the DVD and I made notes. Tuesday morning I managed to pull out about 6 mins which would do the job … which is too much, especially when you consider we still had to film the opening scare attempts, the landing, the breaking into the honeymoon suite, the entry of the bride and groom and the final scare.

6 mins down to 1 minute means harsh choices and I apologise if you own one of the faces which got cut out.

Still, I had the spine of the film. Now all I had to do was turn our house into a picturesque country hotel.

Which actually wasn’t that difficult. Assuming it was in anyway successful.

I started by trying to find photos of Deans Place Hotel’s corridors but couldn’t find anything suitable. So instead I just nabbed one which vaguely matched our decor:

And added our bedroom door: 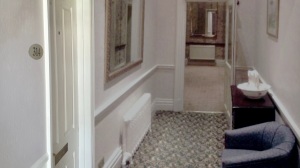 We don’t have that carpet, by the way. Nor do we have a peephole, room number or brass plate saying honeymoon suite. They’re there because I found this image online;

… printed the bits out, stuck the brass plate to card (for added depth) and Prittsticked them to the door.

Even in close up it seems to work well enough:

Although if I had more time I’d have made the cut a little neater on the card, maybe even coloured the edges.

The final touches were a fire evacuation sign for the rear of the door:

… and a completely anachronistic coffee machine + pods … which got cropped out of the final shot anyway. 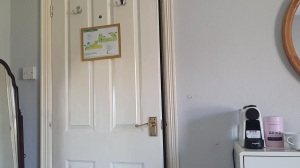 The interior peephole is the same as the exterior, I just moved it from one side to the other during the shoot.

With all that prep done it was time to break out the green towels: 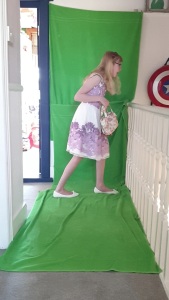 I managed to find a photo of a real room from Deans Place (albeit not the one we stayed in … or if it was, it didn’t look like that in 2005):

… but couldn’t find anything which matched the angle looking from the room into the hall. After a lot of fruitless searching I realised I could just take a photo of the hall downstairs: 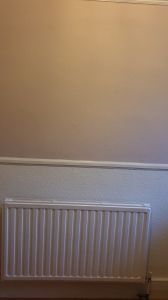 Originally I planned to have the TARDIS land in the hotel somewhere, possibly here:

Which isn’t actually in the hotel but is probably in a hotel somewhere. But I couldn’t get it to match up with the angle of the TARDIS footage so fell back on dropping the model TARDIS into Deans Place gardens.

Similarly I’d planned to superimpose my daughter against this backdrop:

Which seemed a good match for the actual panelling in the ceremony room … but it just looked odd. She was clearly in a room on her own. 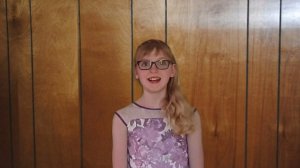 In the end I went with the harder (and slightly worse looking) option of dropping her into the back of the actual room.

This was tough for me because of the inability to draw round people’s heads on my phone. I had to build it in layers, the bottom half of her is a hexagonal mask to fit around the heads of the people in front, the top half is a rectangular mask so it doesn’t cut off her ears, especially when she mimes being sick.

It’s not perfect, but it’s fleeting and … hey, it’s a two minute short film made by a father and daughter who don’t know what they’re doing. It’s fine.

The other major downside is the only available space (in shot) along the wall was behind the head of an ex-partner of a friend. I’d rather have had her behind her granddad or someone else I actually like, but I didn’t have a lot of choice.

Luckily there was a spare seat at a table full of my closest friends at the wedding breakfast which was in shot for most of the speeches. 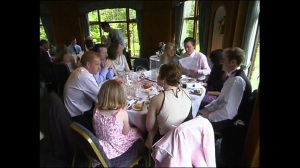 Annoyingly the handheld camera footage means my superimposed daughter looks like a floating torso for most of them, but it was the best I could do.

The last part of the shoot was Mandy and I dressing up (legs only)in our wedding gear (her dress, me in just a similar pair of trousers) and pretending the underneath of our divan bed was actually under a wooden four-poster. 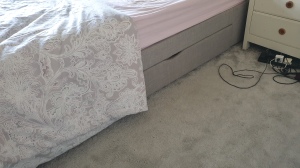 Luckily the drawers pull out on both sides so we could shoot right through. Again, I think it works in passing. Depends how much you’re enjoying what’s happening.

The final mid-credits scene was an afterthought really. I just thought it was funny.

All in all we shot for a few hours in the afternoon and I finished the edit by midnight. I decided to lean into the 14:9 ratio of the 2005 footage and added the black bars over all our 16:9 shots whilst in the past. Hence the coffee-making station getting cropped out.

At about midnight on Tuesday I discovered there were too many effects in the film for my phone to cope with exporting the edit and after an hour or so of trying I had to give up and hope it would work in the morning.

I still don’t know why, it’s not that intensive. Not compared to the Fires of Eastbourne.

But it wouldn’t work and so I spent a hurried Wednesday morning pulling out all the effects and adding them back one by one, exporting a copy each time. Ultimately I made my self-imposed 13.00 deadline but it was a bit gruelling.

I swear the next one (whatever that may be) will be four seconds long.